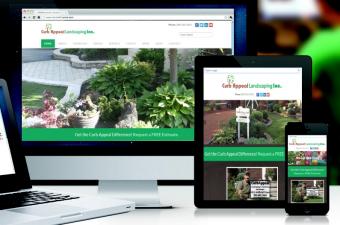 Curb Appeal Landscaping Inc. is one of Niagara Region's most renown landscaping service providers and a member of Landscape Ontario.

Primarily creating 'curb appeal'  in St. Catharines, Niagara Falls, Welland, Niagara-on-the-Lake and surrounding areas, Curb Appeal has been featured in local newspapers, magazines and on the Marilyn Denis Show. Their services are provided to residential homes, commercial properties and property management companies as well as municipalities and industry. Some of their most recent work can be seen at the new Outlet Mall in Niagara-on-the-Lake.

PRowl Communications has been working with Curb Appeal Landscaping Inc for several years. Initially we were contracted to redesign their old website a few years ago, provide social media management and email marketing services. In late 2013, Vito Pirri, owner of Curb Appeal came to us with a new idea. This idea involved making his landscaping company a leader in his field, even more so than he already was.

The idea: e-commerce for the backyard landscaper.

Vito had done his homework. He came to us with a thumb-drive of photos, an excel sheet of product details and pricing as well as his vision to see his website transformed into the backyard landscapers' paradise. Vito's vision was to allow the average person to shop on-line for plants, shrubs, trees and bushes, buy the products and have them delivered to their door in a timely manner for the home owner to complete their own project. The e-commerce site also doubles as a show-and-tell feature for Curb Appeal in the sales process. Vito uses the e-commerce section of his site to demonstrate the plants he will use to create 'curb appeal' on his clients' property.

The new site also features an event calendar, a blog, and a photo gallery of services. As the site is responsive to all devices it is viewed on, Curb Appeal has seen an increase in viewers to their site in excess of 500% over the previous year on his old website.

Curb Appeal Landscaping's website truly is a showcase of their work.